Craig has released his "Demon King" album which is planned to only be sold at gigs where he is playing, at a guess then you will be able to get it on The Alarm "Vinyl" tour and the as yet to be announced dates The Mission promised for this year at the very least. 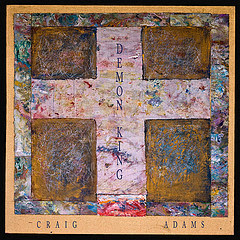 So what should we expect from someone that has added distinct styles of playing to bands ranging from the Sisters Of Mercy, The Mission, The Cult, Spear Of Destiny and of course The Alarm? Well, it's not like any of these bands but at the same time it is the sum of all of them! (Well maybe not The Cult!)

Craig wrote all the music and lyrics on the album bar the lyrics to "Close My Eyes" which were provided by Dave Gregory (I'm guessing the same Dave Gregory formerly of XTC and currently the under rated Tin Spirits but I stand to be corrected!). Well...we have been corrected! It is not that Dave Gregory...it is Dave Gregory brother of Paul Gregory who was with Craig in the Expelaires. Paul is also an author who uses jottify under the name Gravyboy. Check out his novel on there (free download for i-pad and Kindle) which is called "Smoke And Mirrors"

All instruments are played by Craig and co-producer Mike Kelly except for some notable guest guitarists namely Matt Buffey, Kirk Brandon and James Stevenson who play on separate tracks before uniting on the song "Freeze".

"Demon King" opens with a short ambient piece lasting barely a minute but sets the scene for what's to come with the fair ground hustler telling us that "the louder you scream, the faster we go!"

Vocally Craig has hints of Guy Garvey of Elbow fame or at least to my ears he does! Musically however he doesn't settle on one genre. "Crying" wouldn't be out of place on a Sisters release , brooding and stripped back - you can almost picture the dry ice and white lighting! Tracks "Looking" and "Freeze" (the albums Spear Of Destiny moment) are great solid rock numbers where "Soul In Light" musically could pass for The Alarm even before the acoustics kick in! Vocally and lyrically it is a different story and is it's own master. Album closer "Lipstick Bruises" has a stark beauty which sums up the album nicely, it has a depth that will keep you coming back to it

This won't be the easiest album to find as you can't just click add to basket (though that could always change I suppose) but it is definitely worth hunting out when you head for the merchandise stall.
Posted by Rob at 11:23