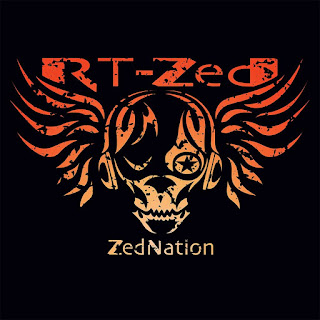 Hi Steve, it's been a while since the last RT-Zed album and so much has occurred globally so can we start by covering what's been going on with you and the band and what lead to John Magner's return?

I pretty much recorded and mixed right the way through lockdown. I got very sick with Covid in March 2020 after which I had antibodies. Once I was CD well again I just recorded and mixed. "ZedNation", the new album, "Dub Machine" with Ali McMordie from SLF. I also put together4 dub mixes of classic Stiff Little Fingers tracks to be released in the future. I also did a dub mix, alternate versions and original versions of the "FUNKPUNK" album. I was very busy the whole time. John came back from America and we started working together straight away. We'd lost touch whilst he was in the States but when he returned to the UK we went straight back to work.

When did Jamie Alleyne come on board?

In 2019. We reconnected on Facebook and the first thing I said was "you wanna join RT-Zed?" and he was like "fuck yeah!" It was a no-brainer really, he's one of the most natural musicians I've ever met. He may not be "famous" but he's truly gifted. Watching him play in the studio is a pleasure, he's groovy, he rocks, he makes very few mistakes and he's a gentle soul. I was in his band Decoda in the 90's, in fact we supported SLF in 1996 at The Forum. It's weird how things go around.

That sounds like a great full circle or fated thing for those that believe in it! Was it these sort of gifted moments that lead to the decision to create a full band line up?

Well, yes. The guys were back so it was a foregone conclusion. I'd played all the instruments on "FUNKPUNK" apart from lead guitar and for "ZedNation" I wanted the band feel you mention. So yes, it was a more integrated, collective approach. A band, utilising the individual members talents.

And it opens up the possibilities more readily for live dates so naturally I should ask what your plans are there, I know you've already got the Westworld Weekend lined up.

Yep, Westworld is in the diary and because SLF will probably be quiet in the latter part of the year we are looking to do shows then.

That sounds promising! Have you considered what a potential set would look like yet or are you going to use it as a showcase for "ZedNation" rather than draw from all the albums?

The set list is sorted and it's a mixture of all the albums.

You mentioned "Dub Machine" and the alternative "FUNKPUNK", is there a time scale on when these will appear?

"Dub Machine" - which is Ali and I's dub album together will be released later this year. The "FUNKPUNK" dub, alternative mix album will come out sometime in the future. Not sure when. At the moment it's all about "ZedNation". We've had great reviews and I was most proud of the Modern Drummer review, the drummers bible, so to speak, they called me "The British Dave Grohl" which was pretty amazing.

The buzz around "ZedNation" and the universally strong reviews must be hugely satisfying.

Yes it is. We're trying to get it on radio but that's a whole other world mate. The sales are strong, the reviews are astounding - it's going well. We're all so pleased. We even got 9/10 from a metal magazine - I don't know if that's good or bad but we'll take it.

I can see why the metal press would pick up on it in the broader rock and punk terms there is definite crossover potential. That Dave Grohl comparison must be both satisfying and also a big help in getting the album to achieve the breakthrough potential that it certainly has?

Well, I hope it does. If we can have a bit of Foo Fighter sucess that'll be fine by me. It's hard to come from behind the kit to up front. Some people think you're an upstart! "Get back in your place!" But fuck that. I make music and if it's behind the drums, as a producer or playing guitar and singing - it's all the same. I think Dave has proved it's ok: don't panic the drummers gonna sing but it's cool. Loads of front men played drums before they were singers. Iggy, Kravitz - Stevie Wonder - Prince - all these guys play drums really well. Drummers often go to the front, Grohl, Phil Collins, Taylor Hawkins, Roger Taylor. It's nothing out of the ordinary.

As we're on the subject, do you have any words on the passing of Taylor Hawkins?

It was a shock to us all. I just think of his family. He had the hardest drumming job in the world. On stage playing drums with Dave Grohl for 3 hours a night on those songs in front of thousands every night. No wonder he had anxiety issues. I respected his playing enormously and just, as I say: my heart goes out to the family. It's a massive loss to us all and who knows where Foo Fighters will go from here?!

I think it hit home for a lot of people and we can nevr take things for granted but moving things back to "ZedNation" how difficult was it not to have the pandemic infuence the lyrical themes in the album?

I just thought that would be too obvious. Way too easy! I wasn't going to wallow in the situation, I just got on with other things. I was very ill with it as I've said and I wasn't going to let it hold me back anymore than it already had.

What did you draw on for your lyrical inspiration? 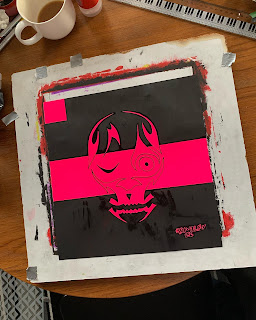 What prompted you to offer a unique hand painted deluxe limited edition of the album?

I wanted to add something personal and special for the Deluxe Edition. First I thought about hand written lyrics but that's been done a lot before and I didn't think anyone would want that from me. Then I considered a bonus track but folk would already have 12 new songs on the album, so that was a non-starter. So, I was watching a documentary about Andy Warhol of whom I'm a big fan, and reading a book about him at the same time. I liked his idea of repetition with the soup cans for example - and the idea of doing 100 hand painted Zed Hed logos came to me. It was kinda extreme because that's a lot of work but I chose to do it BECAUSE it was extreme, because it was difficult. It took me 8 weeks: each one took an average of an hour and a quarter per painting. They're all in the style of Pop Art - influences include, Mondrian, Lichtenstain and of course Warhol. They're being photographed and catalogued, they'll be available all together in booklet form titled "The Same But Different" at some point so that they can be appreciated as a collection.

It also gives a reason to buy rather than stream, if "ZedNation" is to reach a wider audience streaming sites must be a necessary evil but what are your thoughts as an independent artist?

I hate streaming sites. They rip-off artists. We get fuck all! It's a joke. I don't have Spotify because it's legalised theft. They're cunts! Absolute cunts.

So given the traction, the press and reviews what are your hopes and expectations for the album?

Who knows mate - I just want those who've bought the album to like the music and use it. To drive home to, to vibe them up before they go out, to party to, go crazy - make love; just enjoy the music and the attitude.

Having heard the album I'm pretty sure all that is a given! Before we move on to the future I just wanted to go back to the Dave Grohl comparissons that we touched on earlier. I would hope that more people would be drawn to listen to the album but what is your take?

I was honoured to be compared to Dave Grohl, he is an exceptional musician and so it was so flattering to get that accolade from Modern Drummer Magazine: incredible. Because I'm known as a drummer first as is Dave and because I have my own band I suppose there are similarities. Let's hope we can have a little bit of Foo Fighters success.

It would certainly be deserved that's for sure and I truly think that "ZedNation" has that potential for a much wider audience. If the past has taught us anything it's probably to expect the unexpected in relation to RT-Zed so what's next for you and the band?

I hope we can reach a wider audience but it's difficult - we want to play more live and we are trying to get radio play but for an independent act it's extremely difficult. We are supporting Spear of Destiny at their Westworld Weekend Friday 13th May but we are looking for a set of dates in November, December time. I just want to continue to make music with these guys. When I'm not with SLF, I'm doing this - it's a compulsion. 😉

That would certainly be great to see and as you mentioned SLF what's on the horizon now that you've finished the delayed 20/20 Vision tour apart from a few rescheduled dates due to Jake being unwell?

Jake just got a head cold and it went down into his throat. 4 days rest and he was back in the game. We hope to record an album in 2023 and tour more extensively internationally. As for 2022? It's all UK shows where we are going to places we haven't been for a while. For all dates go to SLF.rocks. It's great to be back with the lads ans we can't thank the audience enough for coming to the shows. The numbers increase year upon year and we are amazed and grateful.

It sounds like 2022 is going to be a very interesting year! Steve Grantley thank you very much!