James Stevenson - The Shape Of Things To Come EP Review 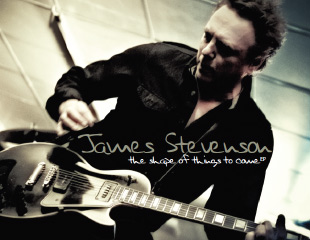 When James announced he was working on a solo album two thoughts ran through my head, the first was I wonder what that will sound like and the second was I WANT IT!

This EP is a taster (or teaser maybe) of what to expect from the album officially now revealed to be called "Everything's Getting Closer To Being Over" and is available for a limited time direct from James' site http://www.jamesstevenson.info/news.htm so be quick before you miss out!


So let's tackle my two original questions, what does it sound like? James has a long and varied cv from the days of Chelsea, Gene Loves Jezebel, The Philistines and obviously The Alarm but he has also appeared with Kim Wilde and Jimmy Nail don't forget. This EP demonstrates the variety that the album will have with all three songs being markedly different from each other, it also shows that having such a varied cv allowed James to enlist the help of  friends that he has worked with along the way.

Across the three tracks here we have Glen Matlock and Craig Adams on bass, Mark Taylor on keyboards, Steve Norman on sax with Chris Bell and Igor Marjanovic taking care of the drums. Then we have the "Sexpistilettos" featuring Maggi Ronson, Elizabeth Westwood and Tracie Hunter providing the female vocals which work so well on the opening number "Suzi's Problem" which fades far too soon during a brilliant guitar solo.

"Naturally Wired" is the most out and out rock number on the EP which has a nice chunky riff running through out and would fit in well on a Queens Of The Stone Age or Them Crooked Vultures release, all aided with a great bass line courtesy of Craig. If we do see any live dates in support of the album (yes that is both a hint and a request James!) this will be the one to get everyone moving and singing!

The EP closes with the slowest number "Been A Long Time Now" which Mark adds some great colour to but at it's core is an absolutely blinding guitar solo before the familiar sax of Steve Norman leads the track out. Now to answer the second question....now that I know what to expect from the album do I still want it? YES!!! If these three tracks do anything they show the range that James has as both a writer and a musician and if the rest of the album delivers like this EP does it will be well worth the wait!